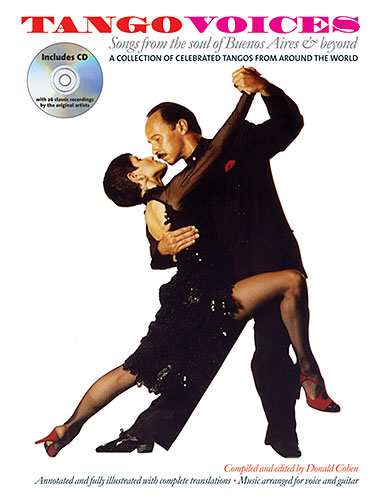 Donald Cohen has compiled and edited a book titled Tango Voices: Songs from the soul of Buenos Aires and beyond. As the title indicates, the book is primarily about tango songs – tango canción – tangos and the people who wrote them, sang them, played them. You will get an introduction to the tango and an overview over the worldwide tango today.

Donald Cohen is a retired attorney plus college history and music professor, guitarist and folklorist, and has spent his life studying and researching music from Europe and the Americas. He har over a period of many years been teaching guitar and folk music at a number of universities and high schools. He har extensively lectured on world music on radio, TV and in various educational institutions. He has a site called Fado.org which is about the fado and his book. He has now edited a book about tango, Tango Voices: Songs from the soul of Buenos Aires and beyond, published by Wise publications.

From the backstreets of Buenos Aires to celebrated world music

The book was written primarily for «those who knows a little about tango, and for those know much about the dance, but little about the music or songs to which it is performed», Cohen writes in the introduction (p. 7). The book Tango Voices is a book about the tango, and in the book you will also find a lot of tango music. The tango in Argentina is most famous among the most of us. Here you will hear examples of tango influence on world music. Cohen describes the early beginning of the tango on the River Plate between Buenos Aires and Montevideo, how the tango now has strong ties to other parts of the world. He also explaines the developent in accompaniement, the instruments used, especially the bandoneón, and the differnt stages in the tango history.

Here is one introduction chapter and which presents the tango, its roots and worldvide spreading this counts 15 pages. After that, Cohen presents the tracks on the CD with lot of background information about each song. The last eight songs on the CD are examples on music from beyond Buenos Aires. Cohen has written one short chapter which introduces these songs too. And not to forget, the book contains many very briljant pictures.

There are 26 songs. Most of them from Buenos Aires, but the eight last songs are from «beyond» which reaches far. Among the tracks from «beyond» Buenoa Aires, you will find examples on Finnish, Greek, Italian, French, Rerman and Russian, Yiddis and Danish tangos.

The music on the CD is filled with power and magic. Tango is very «soulful» and exotic to me – as many different kinds of traditional music is. On the CD that is included Cohen has chosen a broad variety of tangos. Some are old and you can hear it. The earliest recordings seem to be from 1920, some are quite new, only a few years old.

I really like the German example Oh, Donna Clara. It is sung by Max Raabe. He has got a very light voice, maybe a lush tenor or a castrato singer 🙂  You can also hear the legendary Astor Piazolla, the tango diva Ada Falcón (myspace), the Finnish singer Sanna Pietiäinen and the Vietnamese singer Khanh Ly and many other excelent artists. Unforunately I can’t find information about when songs are recorded, only title on the album and the artists playing and singing.

For voice and guitar

Donald Cohen has spent 6-8 pages on each song, on the first one or two pages where he presents its author and composer and the artist who performs it on the CD. On the other pages you find the lyrics to the songs with arrangements for voice and guitar. The chords here will be a bit difficult for many guitarists – lots of Eb7, Bb9#11 and so on. But it helps with the chord diagrams that Cohen has made for every chord. These are placed together with the chords above the melody line.

At the end of the book, Cohen has made a bibliography over books for those who want to find out more about the tango. He also has recommended some publications and internet sites for the same purpose. If you are in Buenos Aires, Donald Cohen har made a list of recommended  tango clubs and museums and institutions you should visit with contact information. Visit the website Tango Voices and Donald Cohens homepage.

Tango Voices: Songs from the soul of Buenos Aires and beyond (book/CD). Published by Wise Publications.
Perfect, 178 pages. It costs 24.95£.
In Norway it can be ordered from Bokkilden.no. Price: 374 NOK.