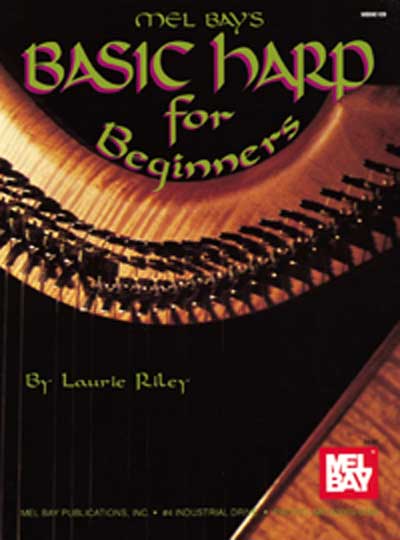 Harp is an instrument that people has been playing in many hundred years. The oldest harps found, are from 1200 B.C. The harp is an instrument that you will be able to make nice music on even if you are a beginner. It is easy to create nice music on a harp. On our website we have reviewed some tutorials and books about the folk harp and a couple of song books with melodies arranged for harp to inspire people to play this wonderful instrument.

Laurie Riley is a professional harper from America. She plays ethnic, traditional and contemporary music as well as her ovn compositions on her harps. She is playing on three different harps: one celtic harp, one rare double strung harp and one traditional wire strung harp.

On her website i found that “Among her many credits, Laurie has appeared in concert as harpist to The Chieftains (2003), in a tribute to the late Derek Bell. She was also the first American harpist to be invited to judge and perform for the prestigious International O’Carolan Festival in County Roscommon, Ireland, in 1997, and has toured throughout the US and in Canada since 1985″. She har also recorded a lot of music and made many instructional books and DVDs for harp.

The harps have developed and there are many types of harps played in different cultures. Like folk harp, mediaeval harp, celtic harp, lever harp and pedal harp. On our site we will review material on how to play folk harp, and the focus is the lever harp.

A lever harp is a folk harp that has got levers on each string to sharpen the tone one semi tone if you want to play in another key. If you are planning to buy a folk harp and want tools to learn the art of playing harp, the lever harp will fit best. If you, as I, don’t have a lever harp but another folk harp without levers, I don’t think that will be any problem. You just skip the tunes with any note sharped and play the non-sharped tunes first. Then you can retune your harp afterwards and play the tunes with sharped F till F# for instance. That’s what I do and it works fine.  I have a Norwegian folk harp made by the musician and instrument maker Sverre Jensen in Oslo, Norway.

Basic harp for beginners is a book for those who wants to learn the folk harp and that haven’t played before. It starts with an introduction to the instrument folk harp. She continues with how to sit with your harp, how to tune it, how to pluck the strings and so on. She shows the names of the strings, how the notes compares to the harp and the piano. Riley starts very basic and easy in this book with exercices to train your fingers to play and to “know” the strings.

Both notation and tabulature

In this book there are both notation and tabulature, and this is the only book I have reviewed that has both. then you don’t have to manage reading music in order to use this book. Although notation is very helpful to learn, you will be able to play every song in this book without reading music. Riley gives an introduction to both read the notes and the harp tabulature. The tabulature is much more easy to learn. There is a very soft introduction to music theory and there is a chord chart for different chords on the harp, what strings to pick when you want to play different chords. Now and then during the book it comes a little part of theory.

Some of the things you will learn in this book is to play scales and crossovers. That is when the thumb crosses over a placed finger and is placed on a lower string before the finger plucks. When playing chords, there are three main ways to play them, rolled chords – when the notes are played i quick succession, broken chords – the notes are played separately, and open chords – when you don’t play all the notes in one chord, only two of them for instance. All these three ways to play Riley spends some pages on in her book. You will also be presented for ornaments-notes in addition to the melody to fill inn, grace notes.

Practicing is the way to be a good harper

After this there is time to practice. The last part of the book contains some more tunes to learn where you can practice the techniques from the first part of the book. Here are many traditional Irish, Scottich and Celtic tunes like Mist – covered mountains, Sally gardens, Flowers of Edinborough. On the last pages there are a glossary with words you will meet when you are playing music genereally and harp especially.

Toghether with this book, I will recomend that you use the DVD Play the harp today also by Laurie Riley. This is a DVD for beginners on harp and here she demonstrate the basic skills and fundamentals in harp playing. There are difficulties in playing techniques that it is a bit hard to explain in a book, and it will be very helpful to see how it should be done on a DVD too. There is also a book with tips and advices for every harper, The harpers handbook by Laurie Riley. Feel free to e-mail me and ask if you want to know more about the progression, levels and so on from a “beginner point of view”. I will answer as good as I can. For those who are interested, here you will find many interresting folk harp links. Visit Laurie Rileys homepage.